No one gave the group of people moving into formation in front of the BRAUN store in Hamburg a second look.

German Christmas Markets were in full swing on this cold, dark Saturday and we were about to become the Grinches who stole Christmas.

PETA Germany had organized a team of street activists to call upon BRAUN and the public to boycott Canada Goose (CG).

PETA have been campaigning against CG for a long time and have even bought shares in the company to keep them under check.

Read here learn more about why Animal Rights groups have waged war on this company.

Passersby wearing CG jackets and full fur coats (I had no idea people still did that!) tried desperately to avoid us once our signs and banners were up. Sometimes we caught up with them and other times we let it go. I’d like to think it was the guilt or fear of being publicly shamed that made them run for cover.

#1 —-  One father, out with his child to watch the Christmas parade, rang his wife saying that there were protesters handing out flyers and he had his CG jacket on!! It was actually quite hilarious! He approached us and we had a long talk. He felt he was doing the right thing by choosing a furless jacket. He hadn’t considered that the down might be tainted too. I think he may have been the only CG customer who wasn’t offended by our presence.

#2 —- I spotted 2 girls (let’s call them V and X) from the school my kids attend. They’re about 13 years old. I know V personally, so she bounced up to me to say hi. X, wearing the CG jacket had no choice but to follow. I asked X if she knew about the state of the animals that were used to make her jacket. By this point she was so uneasy, she yelled “I don’t want to know” and bolted. I turned to V . “It’s important X knows. Show her the flyer”. V promised she would and ran to catch up with her buddy. I have no idea how X will react if she sees me in school.

#3 —- A CG customer came up to us and argued his case. He insisted that CG only uses coyotes that are found dead or those that are sick and injured (implying that killing them is an act of mercy). There’s one thing you learn about activism, and it’s not to waste your energy speaking to people who clearly don’t want to listen. Unlike the father in incident 1 who was mortified at what he was hearing, this guy was not going to back down. The CG “ethicality” and “humane” marketing ploy had him in its snare.

#4 —- One woman marched up to us, paraded her fur coat and barked at us about how cheaply we were dressed. In her mind, her fur coat made her feel like she wasn’t supporting the “cheap plastic” that we wore. In retrospect, I now know that it was typical cognitive dissonance we were witnessing.

I also realized that she had to physically cross our space to get to wherever she was going. She must have foreseen the conversation play out as she strode towards us and figured that she could get out of an uncomfortable situation by playing offense. 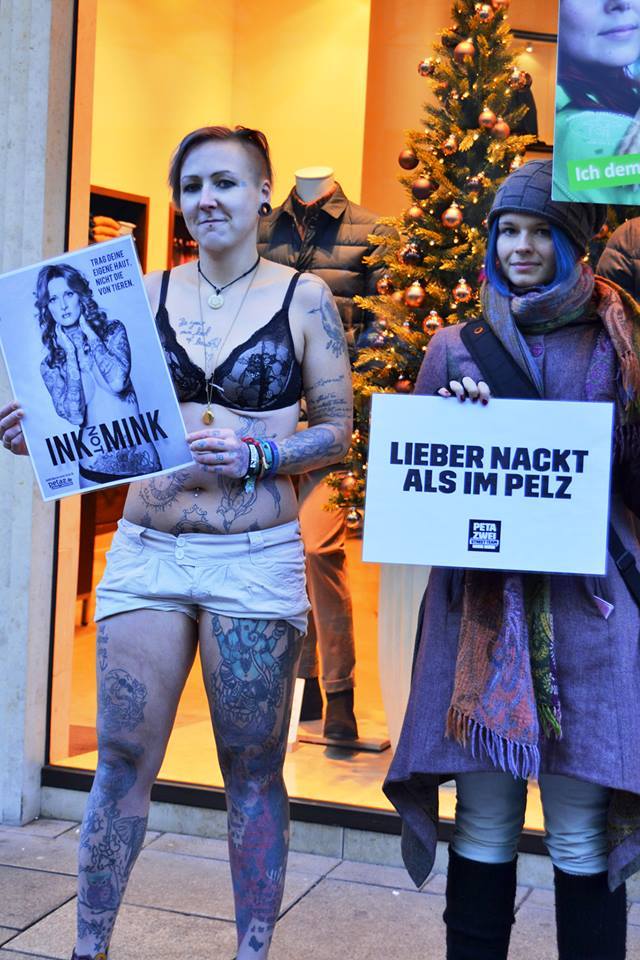 Number 4 was about the worst encounter in the four hours we stood raising awareness. One volunteer and PETA organizer stripped down to reveal her tattoos whilst holding her “INK NOT MINK” sign. She had been training for a week so she could stand bare-skinned for an hour in 3 degree Celsius weather! I have deep respect for the dedication and patience these activists have.

If I’m being completely honest, this protest was such a different experience to the one organized by Anonymous for the Voiceless. The participants were very assertive with the public, they specifically picked out those wearing fur and CG attire to hand out flyers and were quick to retort the occasional rude remark. Not passive at all.

Sometimes it can feel that humans are all cruel.

Then you see that moment of realization in their eyes as the layers of lies peel away, and you realize that we’re not a lost cause. Re-discovering our humanity and helping others do so is how we can undo the evil we have unleashed on our world.

If you care and truly want to make a difference, speak out. If you’re not confident doing it alone, find a group in your city that you can join.

Strengthen your voice for the voiceless.

*Here is a handy guide to help you tell the difference between real and fake fur.